Page is not fully functional - please be patient, it is on the way

Leave your worries and clothes at home.

Get your naturist skipper & hostess crew

To access naturist related content we have to ask for your Patreon support. It is symbolic. Kind of membership, just to show that you are serious and help us maintain this website.. Something like a club, where you can express your ideas, share your experiences, photos and other related content. Find a naturist crew, make new friends, charter a boat together….. There are many possibilities.

We provide naturist skipper and hostess services (so you feel comfortable with likeminded staff) and organise everything for you so you can leave your worries and clothes at home.

So, dear people from around the world if you like naturism and naturist sailing cruises, join us.

Shall we meet on the sea!

Previous
Next
JOIN THE CLUB

… Because there is nothing more natural than to enjoy being naked in the nature during the summer time, or while sailing… We sail naked most of the time. If we stay home during the summer we like to go to one of many naturist resorts in Istria, or to the wild beaches where it’s possible to sunbathe or swim naked. There are many tourists enjoying that freedom.

Naturism and nudism became very popular in the 1960ies in Europe. First naturist camps were opened in France and in Istria (Croatia, former Yugoslav Republic). Koversada, naturist camp situated near Vrsar, in Istria, is the oldest in Croatia. In 70’s and 8’s naturist capmpings and resorts were blooming. Specially in Istria and island Krk. Ada Bojana is the name of the biggest naturist resort on the  Montenigrian coast of Adriaic.

Globally, the oldest naturist camp was opened in India, in 1937.

Belgians, Spanish and Germans were the first in Europe in 18th and late 19th century developing the idea of naturist movement, about life or leisure time spent naked in the nature. Victorian era had also the similar ideas in Great Britain and France. In France in the 14th century there were even naturist communes, in which people used to live and work naked, in accordance with nature, and in total freedom.

ideas to get going

Place for the real naturists (as we are)

Doesn’t meter if you have a boat or not. Here, you can leave a message about your wishes and get in touch with other naturists interested in sailing cruises.

Are you a boat owner interested to meet like minded people on the way? Just leave a message so other members can respond. We can meet in some nice bay, on the anchor and enjoy sunset with a glass of wine and nice company….. Or, maybe you have a big boat and want some naturist company to join you on the cruise…

You don’t have a boat but would like to enjoy sailing and naturism anyway. Yes, why not. Leave a message in the group so you can get in touch with other people with a same interest and charter a boat with a skipper or we can be your hosts so you don’t get in awkward situation with you naked and your skipper in full uniform.

Pick The Plan That Best Suits Your Needs

Membership is just to show that you are serious naturist, keep us safe from prying eyes and have our group for naturists only.

Becoming member of this club you will get access to the content exclusively tailored for naturist sailors – our experience, services and forum.

We can meet, organise our sailing cruises, charter a boat and sail away together.

Get involved & enjoy your holiday with likeminded people. 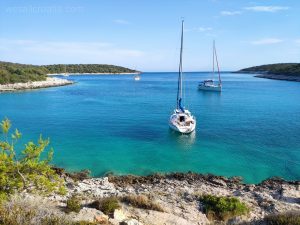 Get your naturist skipper & hostess crew
error: Content is protected !!